I am no stranger to talking about love. Throughout the years, I have written about it in I Fall in Love, When Love Is Not Enough for Justice, Let People Love You: Community Care Knows No Boundaries, My Anniversary, and more. As you can tell from my posts, I discuss love in a number of contexts.

However, I live in a society where people tend to talk about love through very limited and specific contexts. If I say love, people often think about romance and passion first. If it is not the love of a partner or spouse, they think about love within a family context like the relationship between a parent and child, between siblings, or between a person and any number of people in their extended family.

END_OF_DOCUMENT_TOKEN_TO_BE_REPLACED

I have not written on this blog for almost four months because I was preparing for, underwent, and have been recovering from reconstructive surgery. I was waiting for a moment to be inspired to write again, but maybe inspiration is too strong of a word.

When you are working to fulfill your basic needs, engaging in an activity that you normally love is not always the best thing. Sometimes when you try to do something and encounter restrictions or discomfort, reconnecting with the activity becomes more work than leisure.

END_OF_DOCUMENT_TOKEN_TO_BE_REPLACED

Is it just me, or did last week feel pretty long?

Actually, if you are like many people in my social circles who have been heavily engaged in the active work of racial justice, the last few decades have felt extremely long.

I both am encouraged to see more people fighting for racial justice—especially Black lives—in ways I have not seen in my lifetime, and I also am frustrated that this journey to progress is both so long and mentally and emotionally taxing for those involved. This is why when I saw the NPR Code Switch piece titled A Decade of Watching Black People Die, I thought to myself, “A decade? JUST a decade?” I decided not to listen to it.

END_OF_DOCUMENT_TOKEN_TO_BE_REPLACED

If you’re like me, you have been enduring a wide range of thoughts and emotions for the past week.

The incident with Amy Cooper and Christian Cooper.

I don’t even need to write in full sentences. Many of you know most, if not all, of the names I listed.

END_OF_DOCUMENT_TOKEN_TO_BE_REPLACED

The other day, I tried to find an old post of mine on Facebook in which I mentioned MLK. I didn’t find what I was seeking, but I found another instead. Strangely enough, this post does not mention Martin Luther King, Jr., MLK, or any variation of his name, but the powers of Facebook pulled it up for me anyway. This is a post from November 10, 2016.

In one of the comments, my friend wrote, “This is worthy of a Medium post.”

END_OF_DOCUMENT_TOKEN_TO_BE_REPLACED

In my recent posts, I have covered a variety of pandemic experiences. It all started when my friend in California posted about his ER visit on Facebook. With his permission, I shared his story in The Stories That Don’t Make Headlines.

His story inspired me to start the Tell Me About Yourself series by asking my other friends about their experiences in the time of Coronavirus. I learned things about them that I would not have known otherwise—or at least known as quickly and as deeply.

My friend who lives in the New Jersey area outside of New York City had to put her IVF plans on hold. My other friend who lives in Iowa found that the pandemic made her stay-at-home life as a mom easier. Another friend in the Boston area realized that he wanted a more interesting life after the pandemic. My de facto cousin in Manila figured out what parts of her pre-pandemic lifestyle were extra. My cousin in the Chicago area has enjoyed the solitude of quarantine life, but her independent self still really misses people.

Today we will follow my friend who already has had a few major life changes since the pandemic started. He left his job, lost his father, and moved across the country.

What losses have you experienced since the pandemic started? How have you responded to them? How do you hope to move forward?

END_OF_DOCUMENT_TOKEN_TO_BE_REPLACED

In the Tell Me About Yourself series, we last heard from my de facto cousin in Manila. Now we will return to the US and learn about the COVID-19 pandemic experience of my cousin in the Chicago area.

This cousin is making the most out of her time while social distancing and living in quarantine. She is proudly independent and enjoying solitary time, but she still finds herself missing people. (Who knew that could happen?)

There is an innate need for human connection even when you are independent.

What are you feeling a strong need to have during this pandemic?

END_OF_DOCUMENT_TOKEN_TO_BE_REPLACED

The past few weeks, we have followed the pandemic stories of my friends on the West Coast, East Coast, and Midwest. Now we will travel around the globe to the Philippines—virtually of course—and hear from one of my relatives in Manila.

Since COVID-19 has grown across the world, there has been much discussion on defining who and what is essential: essential workers, essential businesses, and essential services.

In clarifying what is essential, we have to define what is extra too.

In today’s profile, my cousin (or de facto cousin) shares what is extra for her.

What is extra in your life?

END_OF_DOCUMENT_TOKEN_TO_BE_REPLACED

Many of you know that I’m a cancer patient. I felt a lump in my breast December 10th and was diagnosed on December 19th. My life hasn’t been the same since.

I had my mastectomy on February 24th, which was the same week that the Biogen meeting screwed over Boston with COVID-19 infections. That news didn’t become public until later—after I already had been to follow-up appointments at five medical institutions with no extra precaution against the virus.

From March 11th onward, I saw different medical institutions change their protocol with intake for patients and visitors. The procedures change daily as new information arises.

I had my egg retrieval on March 19th. I was ordered to be monitored by someone for 24 hours after the procedure. I was told this took priority over any call for social distancing. Two friends took shifts in caring for me in their homes. Each had a spare room where I stayed and had next to no contact with them.

Below is a picture of my breakfast in my spare room at one friend’s house on March 20th, the day after my egg retrieval. A few hours after I ate this breakfast, I got a call from one hospital stating that I had been briefly exposed to a healthcare worker, who later tested positive for COVID-19. 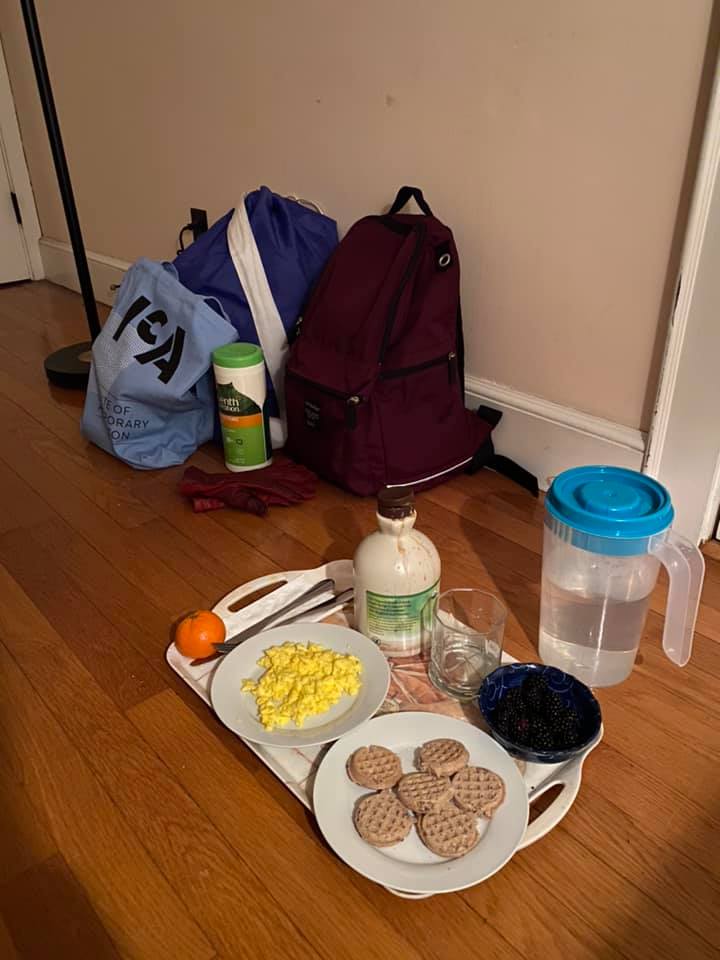 END_OF_DOCUMENT_TOKEN_TO_BE_REPLACED

During my first few weeks of recovery from surgery, my family visited me. My sister flew in a couple days before my mastectomy and stayed for a week. She overlapped by a day with my parents, who stayed in a hotel near my home for almost a week and a half.

By the end of my parents’ last visit with me, my mom raised the topic of how people didn’t know how to talk to me. That is why some of them hadn’t said anything to me about my breast cancer diagnosis.

For context, this is an issue that came up quite a bit after I was initially diagnosed. My sister asked what she could share. A few cousins asked what they could share. Somehow other members of my extended family aren’t sure what they can or cannot say about my diagnosis to others.

Some relatives wanted to share my story with others, and other relatives were saying that they shouldn’t. I heard this from a few different sources in my family.

My mom said that some relatives told others to “just pray” for me—or at least that’s the story in this never-ending game of telephone.